During my childhood, fighting was a way of life. Some fights I started, others I fought to protect myself. Some fights I won and others I lost. I would come home from school with black eyes, bruised and swollen face and missing teeth. I always hid it from my mom who was always against violence. My dad was a boxer and taught me how to protect myself and this helped tremendously. I took judo, which at that time was an effective method of self-defense.

In 1949, when I was 13 years old, I heard of an upcoming self-defense demonstration at our high school auditorium. I didn’t expect very much but attended anyway. I was glad I did. A group of boys slightly older than I was, wearing Judo outfits with black belts, demonstrated an art of self-defense called “KARATE” that I had never seen before. The thing that impressed me most was the speed and agility of the performers. The punches and kicks were awesome and I called it “DIRTY FIGHTING.”

In 1954, while attending my third year at Brigham Young University in Provo Utah, I met a student by the name of Ed Parker. We were both from Hawaii and met at one of our Hawaiian Club meetings. It turned out that I knew his dad who was a member of the High Counsel for The Church of Jesus Christ of Latter-day Saints. His dad periodically gave talks at our church and was an excellent speaker. Ed and I became good friends.

One evening Ed and I were visiting in my room at the dormitory where I was staying. I remember him sitting on a chair playing the ukulele as we talked. He noticed my Judo outfit with my purple belt hanging in my closet. He asked me what form of self-defense I used that outfit for. I explained that I took Judo when I was younger but I now used it because it was comfortable and kept me warm during the winter.

I then told him about this group of boys demonstrating a form of self- defense at my high school auditorium in 1949 that I had never seen before and how awesome their performance was. He told me that he was one of the boys in that group and this form of self-defense was called “KENPO KARATE”. I was totally surprised. I told him that I thought that was dirty fighting. He explained that Kenpo Karate was an art and must be used only for self-protection and the protection of others.

He also explained every means possible to protect yourself. I understood, I begged Ed to teach me this art. He agreed but warned me again that this was for self-defense only! We agreed to meet on the very next Saturday at the gym in the wrestling training room, which had a wall-to-wall mat.

Ed and I met on Saturday and he brought 2 students, also from Hawaii, with him. Their names were Roy Runnels and Ed Forsythe. He told me that when he told Roy and Ed about our scheduled workout, they also wanted to learn this form or self-defense. We worked hard 3 and sometimes 4 days a week for several months. I was clumsy at first and Ed used to mimic my clumsy moves and we’d all laugh. One day during our workouts, the wrestling coach came into the room and watched us. He was totally impressed and asked Ed if we would put on a demonstration at the school’s next basketball game during half time. Ed agreed. We worked even harder practicing for our demonstration. During our last workout before our demonstration, Ed Forsythe broke his wrist. He would not be able to perform.

On the night of the basketball game we were all very nervous especially when we were told that there were more than 2,000 students attending the game. A few minutes before it was time to enter the basketball court, we gathered around in a huddle holding hands and Ed gave a word of prayer. He asked God to protect us from injury and help us to make our demonstration successful. Tears were pouring from my eyes as Ed prayed. When we entered the basketball court the students were noisy and many had begun to walk out. We bowed to each other and we bowed to the audience. Then there was silence. The students walking out immediately came back to their seats. I was in the first demonstration with Roy Reynolds. Before we started, I looked at Ed and he nodded his head and smiled. That was what I needed. Our demonstration was perfect. Every movement and timing went according to plan. Months of hard work paid off. The applause from our audience after each act was tremendous. In our last act, Roy and I held a board while he punched and broke it. I could see the blood coming from Ed’s knuckle but Ed covered his knuckle with his left hand. We bowed to each other and then we bowed to the audience and ran off the court hearing the tremendous applause. We knew our demonstration was successful.

We continued our workouts religiously. New students came and left but one new student joined our group that impressed me. His first name John but I don’t remember his last name. He was a former employee of the department of fish and game. Due to an accident he was confined to a wheel chair. John was very enthusiastic and attended every workout. Ed Parker taught him many aspects of self-defense that could be performed from a wheel chair. I was amazed by Ed’s adaptation of Kenpo Karate to a man who couldn’t walk or kick. But John developed speed in his punches, timing in his blocks and accuracy in hitting the vulnerable points of an attacker. We worked out together for several months before we were asked to perform during intermission at a boxing event. Ed agreed and invited John to participate in our demonstration. John was reluctant at first but later agreed. We worked hard in preparation for this demonstration.

On the night of our demonstration and prior to our time to perform, John was very nervous and we did everything we could to calm him down. We huddled and held hands as Ed prayed for protection from injury and help to make our demonstration successful. Then it was time to perform and we walked down the aisle to the ring. Everyone was quiet especially when they saw John in the wheel chair. John had to be carried into the ring and his wheel chair was placed in the ring. We bowed to each other and bowed to the audience and we began our demonstration. Everything went according to plan and John’s performance was excellent. However, before our last act, a man came walking down the aisle hollering, “you’re all a bunch of fakes! You’re not really hitting each other!” He appeared to be drunk. I motioned and hollered to him “ come into the ring.” He went to the far corner of the ring from me and climbed up the steps. As he reached the top step I ran towards him as fast as I could screaming. He quickly jumped off the steps to the floor and ran up the aisle. We never saw him again. We completed out last act, bowed to each other and bowed to the audience and left the ring among heavy applause from the audience. I knew we were successful.

I left Brigham Young University after the completion of my third year in June 1955 and never returned. But the memory of Ed Parker will remain with me throughout the rest of my life.

* Bill Broad was one of Ed Parker’s very first students at BYU and has since passed away. We are grateful to his son Tim Broad for letting us share this tribute with you. Tim Broad is a second-generation black belt under our father, Ed Parker Sr. 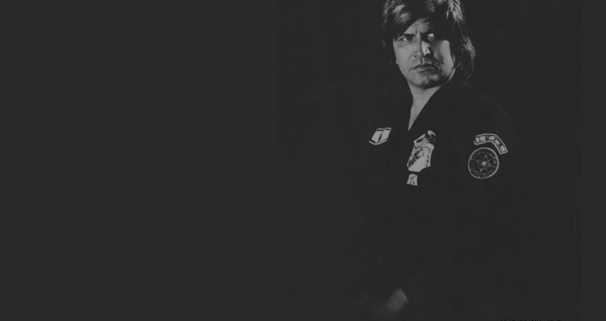 Since the launch of our new website on March 19, 2015, conversations have taken place among Kenpo practitioners around the world. We are aware that some do not understand our intentions and, therefore, misinterpret the goals and direction of Kam IV. Over the past 24 years, since the passing of our father, some practitioners who teach his art have altered it or watered it down, yet they use his logos, his name and his system to advance their schools. Some have been promoted to the same rank as the Senior Grandmaster with no criteria for advancement. People have reprinted information from his copyrighted books and manuals for their own financial gain. Unfortunately over time, the integrity of Ed Parker’s Kenpo Karate has been tarnished. It is no wonder that new students are confused when they look for a reputable instructor.

We reiterate the purpose of our involvement, to protect the integrity of our father’s work. Those who have been true to the system for many years, with the right intentions, understand that obtaining an official license allows them to use specific Intellectual Property because they demonstrate a commitment to the integrity of the art. Those who do not fall into this category will not pass the screening by the Black Belt Board or the consultants and will not qualify for a licensing agreement. The process of cleaning things up is difficult, but we believe it is long overdue.

The goal of licensing is not a request for retroactive compensation, it is for the continued use of our father’s name and system. The cost of licensing is minimal and provides substantial benefits to the studio owner. By renewing all trademarks, copyrights, patents, etc. it allows Kam IV to put things back on the right path. There is no other way to stop the widespread degradation without this process. We are confident that we are moving in the right direction and we hope that those who understand our mission will support us in our efforts.

Welcome to the new Ed Parker Sr. Kenpo Karate website. This site is primarily for those who desire to learn more of Mr. Parker’s true art from those who remain true to his concepts and principles. For those who are confused about what is legal or illegal on the Internet (and there is an awful lot out there), you will soon find the names of licensed studios, certified instructors and approved vendors on this website. As our base of schools and instructors expands, we will keep you informed. Our virtual map is coming soon to help students find an authorized school in their area. Information will be added to the website often to keep you informed of our progress. We hope this site proves beneficial to the many who seek to learn and grow as practitioners of American Kenpo Karate, founded by Senior Grandmaster Ed Parker Sr.